In January 2010, American Greyhound first became aware of a greyhound prison fostering partnership in Coldwater, Michigan.  Our adoption coordinator at the time, had been asked to help with a prison-trained hound named Dusty, who had just graduated and had no group to take him in.  Dusty was such an impressive dog that we immediately contacted Gaye Ann Weaver, who managed the program at Coldwater.  We inquired about details of the program and immediately committed to four hounds in the next class.  This number eventually grew to nine American Greyhound dogs in the program at any time.  The program became so successful with our adopters that soon we had over one half of each graduating class spoken for by graduation day, thereby avoiding the need for locating a foster home and moving them directly into an adoptive home. 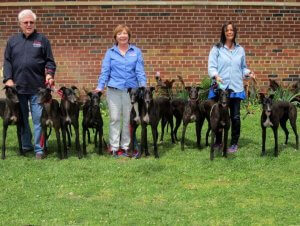 However, the benefits to the retired racing greyhounds attending these prison training sessions and to groups associated with them, like American Greyhound, are only a part the puzzle.  The other major beneficiaries are the inmate handlers who train the hounds and make them what they are on graduation day.  The enrichment the program brings to their lives, the ability to experience the unconditional love of their greyhound charges, the opportunity to learn to trust, to be patient, to be compassionate, all are things that cannot be measured in words.

In early 2011 we learned that the facility housing the program would be closing, effectively shutting down our direct participation in a prison training program.  We continued to receive hounds from Florida prisons, but the logistics of moving them north along with the inability to market them while they were still in training made this a less than optimal alternative.

Fast forward to later that summer and we were contacted by Gaye Ann, who had been working to resurrect a program at another facility within the Coldwater complex.  She had some spots available for a handful of dogs and wondered, “Was American Greyhound still interested?”  Of course, there was no question…we were absolutely interested.  So began American Greyhound’s association with a new organization within the Coldwater, Michigan prison complex….The Greyhound Inmate Experience, or TGIE.

After the initial class, Gaye Ann began building on the number of spots and is currently back up to the twenty spots she had built to before, and again, American Greyhound has committed to nine of these.  And, the hounds are coming out with even better training than before.  Gaye Ann and her husband Ron, do an outstanding job of overseeing the program and have it running like a Swiss watch.

To learn more about “The Greyhound Inmate Experience”, visit their web site tgie-greyhounds.org.

Watch a nice story about one of our TGIE Dogs named “Goldie” who got adopted into a wonderful home:

There are no upcoming events at this time.