Sharon and Robert Larson live in Tinley Park, IL. along with their 3 dogs (Big Bird, Dodge and Lalita). Sharon and Robert have been involved with American Greyhound since 2011, and have loved and fostered between 35-40 dogs. Sharon (along with her dog Big Bird) volunteer with the “Greyt Readers” program in her hometown of Tinley Park. Sharon also does adoptions at various locations in the area, and, in addition, serves on the American Greyhound Board of Directors. Robert also helps out when he can, and has driven the American Greyhound van and trailer across the country many times to pick up, and safely deliver loads of dogs back to Indiana.

“Our lives changed forever in July of 2011 when our special needs Rottweiler named Presley passed away, and his very best friend and buddy, a gentle beautiful soul named Roman (who was a Belgian Tervuren) went into a horrible deep depression. Nothing could pull him out of it, and I mean nothing. Our vet actually told us he would die of a broken heart if we didn’t get him another pet. At that point, I began my process of applying to adopt a greyhound from American Greyhound. We were approved to adopt, and we fell in love with Ticket, a gorgeous brindle male. We were nervous to meet him, but wanted to make sure that Roman approved, so we all headed off to Merrillville to meet Ticket.  Roman fell in love with Ticket, and so we brought our very first greyhound home that day. Ironically, it was the day before my birthday, and this was the very best gift ever! Ticket and Roman bonded and were inseparable, and now finally, Roman’s heart was healing. And of course, we fell in love with the breed, and so began us getting more involved with American Greyhound. 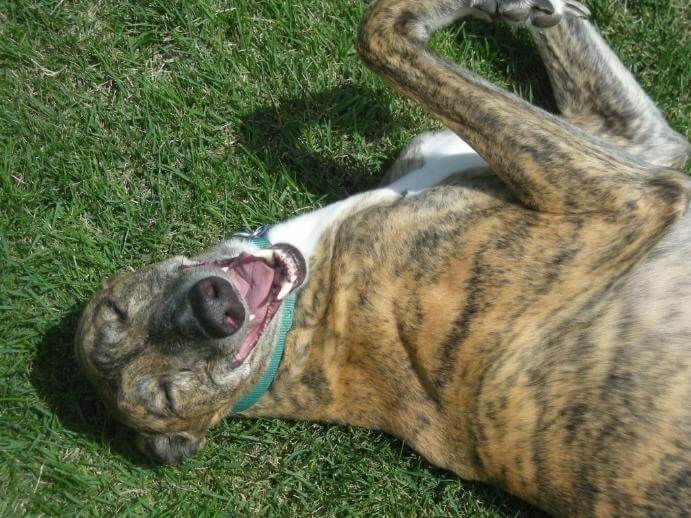 At one point I was asked to help out on a trip to the Michigan Coldwater Prison to assist in getting some greyhounds transported back to Valparaiso. As we were getting the dogs into the vehicles, I was asked if I would like to foster. My exact words were “sure, ok, yes, of course.” So that day I came home with our very first foster dog who was a petite little girl named Rita. We only had her about a month, and she ended up getting adopted out to a lovely young lady who lived in Michigan. I never knew how many tears I could shed until I saw Rita walking away from me with her new mom. 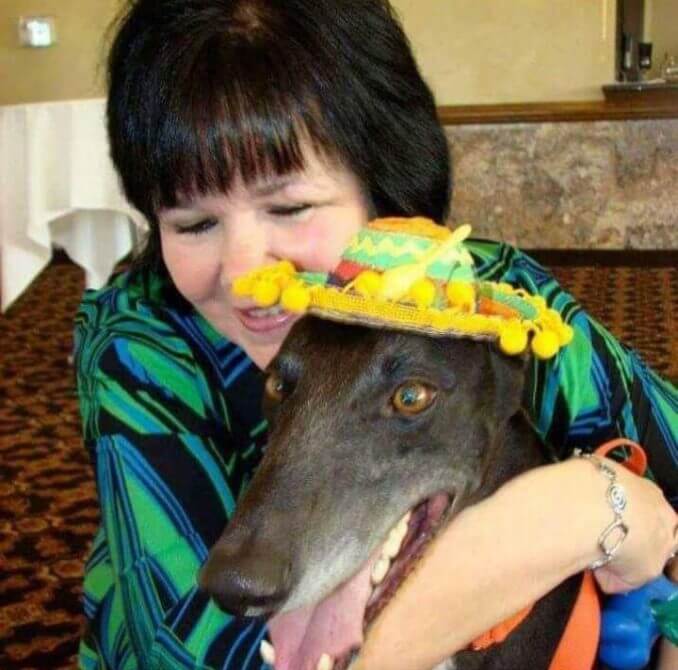 So, that began the foster process for us. We have probably fostered close to forty dogs; some for a very short time and others for quite a long time. We had a dog named “Chance” for nine months who was an absolute hoot, and always found himself in a mess. He was such a character, but no one seemed to want him. Chance loved kids, especially boys, and needed to be with a family with children. Our grandbabies live in Minnesota so that didn’t help.  Chance was so fun and so, so happy; he could turn the stove on just by wagging his tail. After 9 months he finally went to his forever family where he got to live with a little 4-year-old boy, and now currently lives a wonderful life in Indiana. 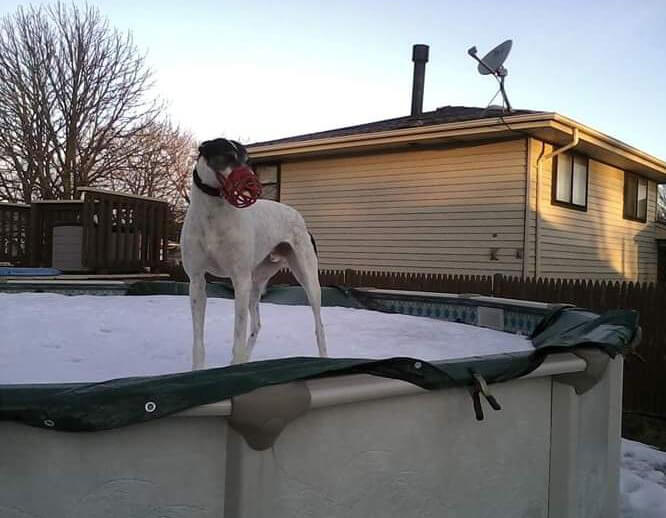 Foster dog Chance on the pool cover (always getting himself into situations).

On one of my prison runs, I received a black male dog named “Dodge” to foster. I’ll be very honest here, I am a brindle snob, so when I got this big black dog, I never dreamed I’d be adopting him. WRONG!!! He became a Larson less than 72 hours later. He is what I lovingly refer to as my “anti-social aloof boy.” But he is a loyal and loving and handsome dog who just likes his own company, that’s all. Dodge doesn’t need other dogs around him to be happy. 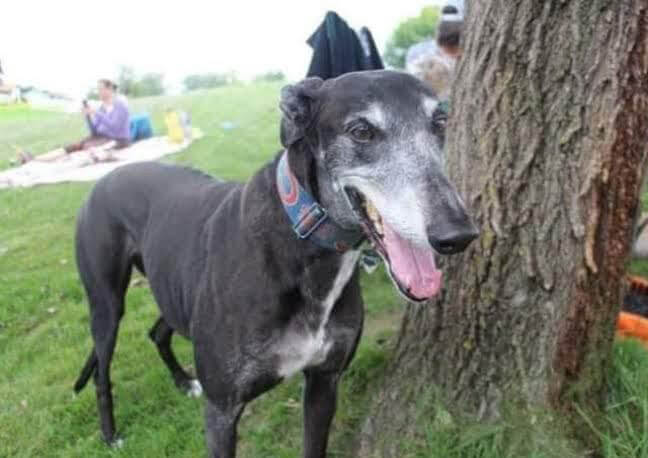 We also took in a senior brood mama named “Charity” to foster. She was a gigantic love bug, and definitely the mama bear.  She ruled the roost! 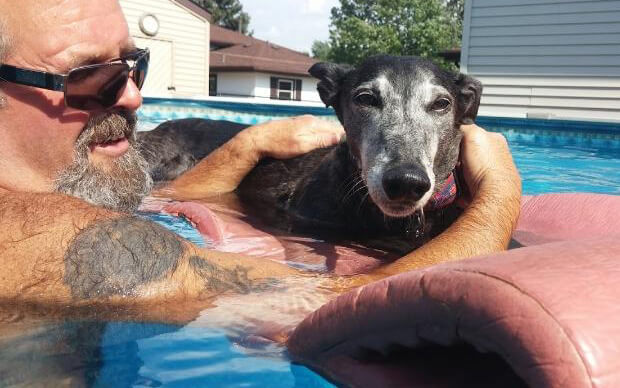 Then, in July of 2015, Ticket got very, very sick and died from hemangiosarcoma, two days before my birthday. Then four days after Ticket died, Roman died. I still think he died of a broken heart, but the professionals said stomach cancer. But, they were now together again, and this was the worst birthday week ever! 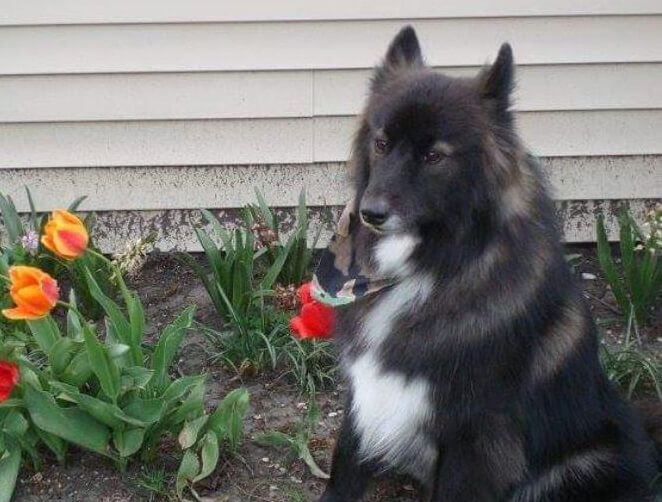 To heal our hearts, we then adopted Charity. She became a Larson and we were so happy to have our first “official” girl dog!  We lost that sweet girl in January of 2018, but she certainly lived a good, long life!

In the middle of all this, we met and fell in love with a dog named “Mr. Flying Berdych,” (aka Big Bird). I honestly don’t know what makes Big Bird famous, or infamous for that matter, but whether it’s his large size, or his large personality (yes, he talks) or his huge friendly heart. But this guy is almost like a celebrity as everyone has either heard of him or knows of him, but he is loved by all. Barb Coggins said it best when she said “the reason he is so big, is because his body has to hold his huge heart” which is a very true statement! He is a wonderful ambassador of the breed, and he is the one who teaches the other foster dogs we bring home how to be good house dogs. His manners are impeccable and he is truly a gentle giant! Ironically, his big heart is giving him some medical issues as he had to wear a halter monitor this past summer to make sure his heart is healthy. He had some concerns with A-fib, and his heart would stop and start too suddenly, but that heart is still strong, and full of love for everyone. 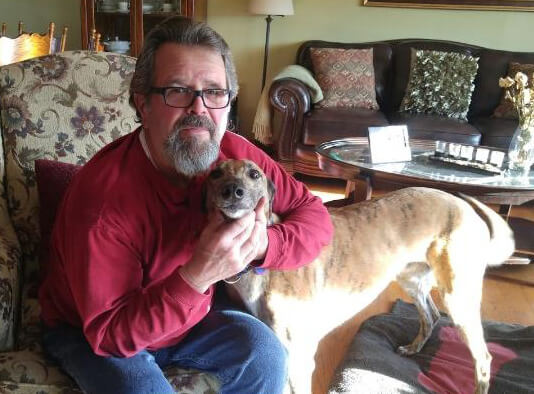 While we were fostering and adopting these dogs, we became more and more involved in American Greyhound. Robert has gone on hauls to Arkansas, Alabama, West Virginia, Kansas and Florida to bring dogs home. We have participated in St Patrick’s day parades, attended annual picnics, gone to many, many meet and greets, and Robert is a polar bear. Yes, he plunges into lake Michigan on January 1st of every year to raise money for American Greyhound, and he says “it’s all about the hounds.” 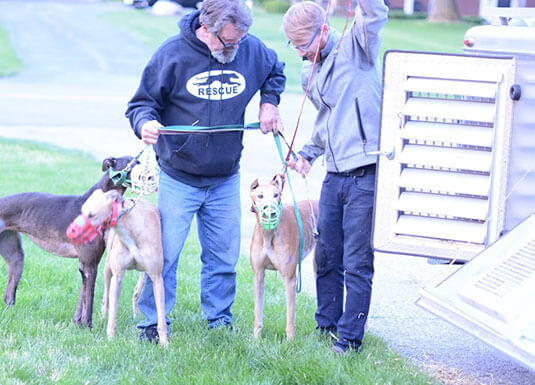 I am also involved with the American Greyohund “Greyt Readers” program at the Tinley Park library, along with volunteers Tony Neetz, Jody Baurele and Diana Hubka. Big Bird is also a celebrity there because he has to hold hands with the kids while they read to him. This program is very near and dear to my heart. I also serve on the American Greyhound Board of Directors, and help with adoptions also. 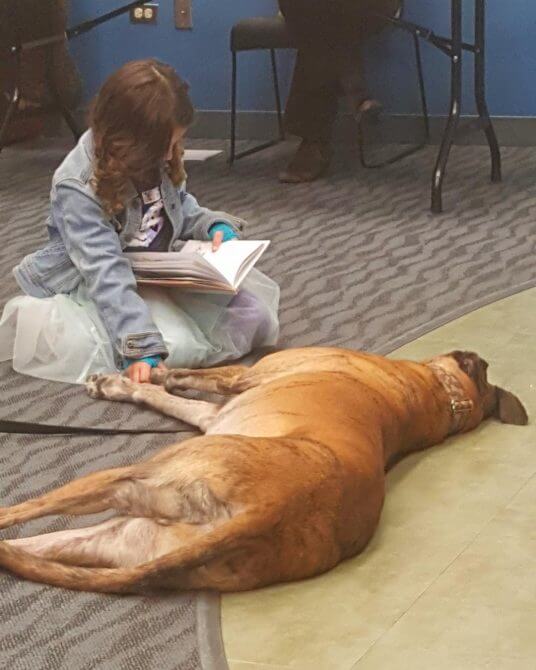 Last April, we brought home our first Galgo from Spain, and this little girl is beyond amazing. I am so proud to be part of the “Daphne Legacy Tour Group” who brings Galgo’s over from Spain. Lalita has truly humbled us and made us realize that we need these dogs as much, if not more, than they need us. To even try and begin to imagine the horrible lives they had before as hunting dogs in Spain makes me sick. We are so lucky to have her, and she has turned into quite a spoiled little Prima Donna, and we wouldn’t have it any other way. 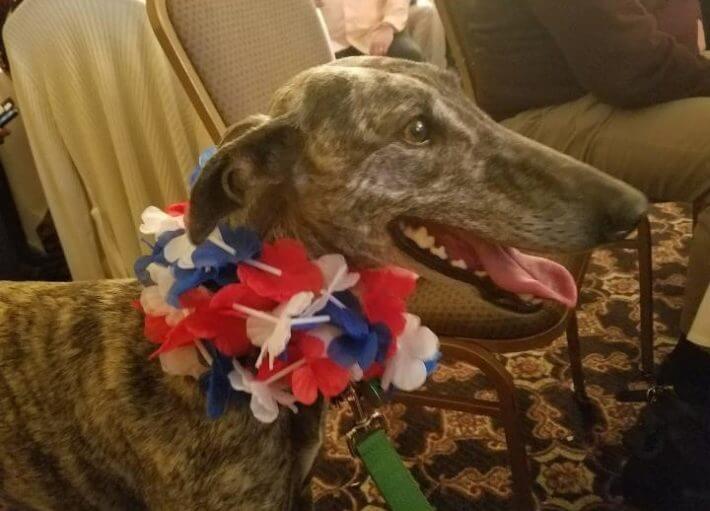 I would like to say a big “Thank You” to American Greyhound for all they have done for us, and for blessing us with all of these beautiful dogs who we call our family!” 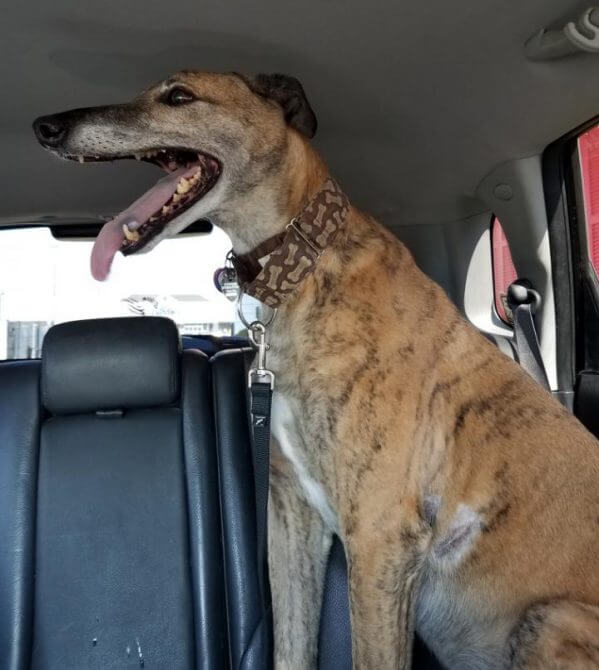 All of us at American Greyhound would like to thank Sharon and Robert for all of the hard work they do, as well as the important contributions they make to the group, which make a big difference in the lives of the dogs we all strive to help.

The Volunteer Spotlight recognizes individuals who play a valuable role within the American Greyhound family, and also showcases their contributions and hard work which prove invaluable in helping the hounds and the organization as a whole. If you know someone who should be in the Spotlight, please let us know by sending an email to Loree McKinney (mlsm@comcast.net) or Tony Neetz (website@americangreyhound.org).
Share This